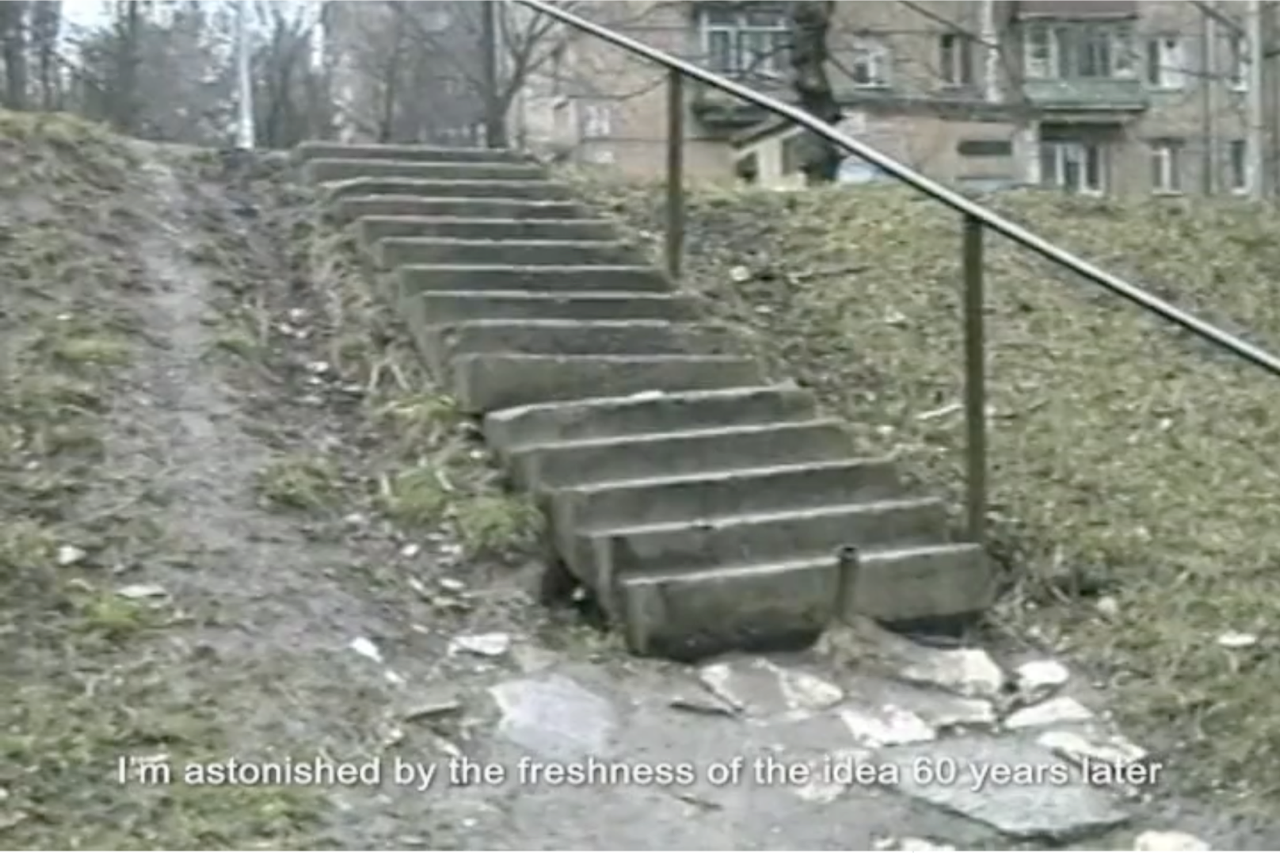 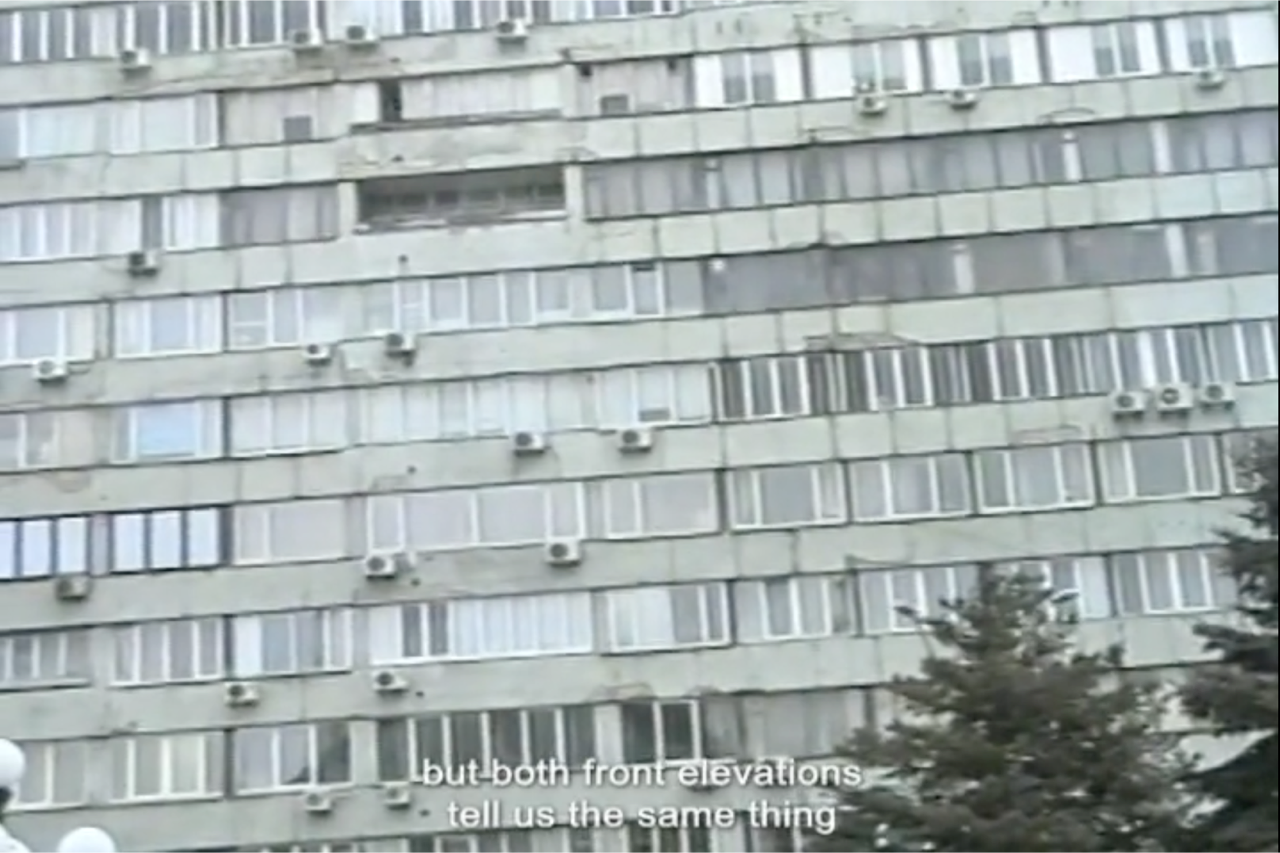 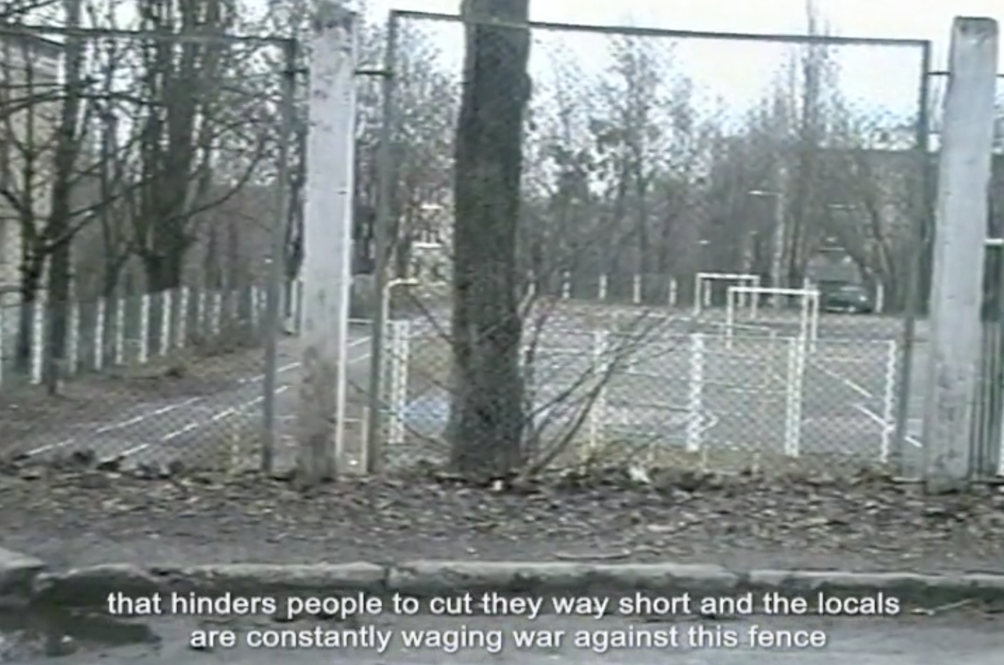 Susanne Clausen: The video was made in 2009, by the artist and architect Ivan Melnichuk in Kiev. You have described it as a documentation of some grass roots improvements in public spaces in the city. What was the situation in Ukraine in 2009?

Lada Naknechna: 2009 was the last year of Yushchentko’s presidency after the first wave of protests in 2004, just before Victor Yanukovyc came to power. There was the financial crisis, and there was a bad contract between Russia and Ukraine over the supply of gas. It was a time of diplomatic war. In some ways, it was quite a depressing time. Kiev was in a permanent ‘wild state’. In this film, Ivan Melnychuk is observing and documenting the changes that occurred in the city. All these spaces are in a state of ruin now. Most of the buildings that we see in the video were built from the late 60s onwards, when Khrushchev started building apartments blocks for the workers who were arriving from the villages. They came to build the apartments, and then they stayed and moved into those flats.

SC: The video introduces us to a sense of publicness, as it follows the filmmaker through the city. In Soviet ruled countries there was no private ownership of housing, there were no landowners, no developers, no “placemakers” [See ref.]. Did this mean public space was created differently, and are attitudes to it different in those countries? How would you describe your experience of public space in Kiev at the moment?

LN: Public space had been abandoned for a long time. Originally in Soviet times, and since, the city had planned to provide cheap accommodation. When housing and urban space was privatised again in the 90s, decisions on planning were made at random and people started to take small steps to make improvements. People also started to occupy space to do what they wanted, to plan and to build as they saw fit. Developers came in very quickly, built apartment blocks, and then abandoned them. Many decisions seem to have been taken at random. On a small scale people started to try to create something for themselves, taking some small scale initiatives. Perhaps, they needed a passage way, and so someone simply cut a whole into the fence, as you can see in the video. Or they quickly made up playgrounds for children out of some concrete ping-pong tables, as there weren’t many playgrounds in the city.

People started to find out how they could live in these new circumstances. The pop-up market is near a station in a park, and so people just built tables quickly from what they found. And then people from the villages came to sell what they had and went back home in the evening.

SC: There is also an interesting part in the video where the filmmaker is looking at the maternity hospital in the city. He tries to identify the materials used on the façade of the building and realises that they are all different. He reveals some of the process that might have governed the decisions by management when they made some renovations.

LN: The filmmakers, who are also architects, are observing the ‘improvements’ of public space. The hospital building is very curious. Parts of the decoration on the outside, on the façade, are obviously much better quality. This is a public hospital, probably in quite a dilapidated state overall and when the management got a bit of money they only made these necessary functional improvements to their own offices and those of the fee paying patients. The areas reserved for the general public patients to have their babies were left untouched.

I feel that this video is very much about something very common in Ukraine at the moment; showing small gestures. These gestures are emblematic of the situation, which still persists in many different ways. There is a sense of pragmatism, but it is about improving a situation for oneself without being able to reflect on the effect it might have. People just occupy or take hold of spaces, of facades of building. These ‘improvements’ are not really violent but continue to manipulate public space.

SC: Do you still recognise these spaces now? The time span is actually not so long. From the early 20th century onwards land and property were rapidly nationalised and in the 1990s the rapid re-privatision began followed by their restitution.

LN: There is a big change now with real estate. Developers and individuals are buying big places in the centre and building new apartment blocks, there is a lot of development and change. For instance the facades have become more beautiful, they have been cleaned up. The city looks prettier, and there are less of these abandoned places in the centre. But the renovation and restoration is more or less superficial. No one cares about preservation or historical accuracy. It all seems to be about the imagination of what constitutes a national monument; in a sense to re-create what one would have liked a nation to have been or fictioning what it should look like in the future. This is where a lot of kitsch ornaments appear.

SC: What is the situation with architecture now?

LN: The video shows us that we live in the ruins of the Soviet Union. The Soviet Union was a repressive state with a big narrative and big plans for the future of society. This is now all very fractured. It is great because you can make changes according to your own preference and taste, or your situation, but if there is no regulation, things can become very violent.

SC: How do you think the situation of public space has changed through this?

LN: In the Soviet Union neither public space nor private space really existed, because private space was also public. The notions of public and private do not correspond to how we talk about them now. No space was privately owned but all space was centrally regulated and any manifestations in urban spaces were staged.

Now with growing privatisation, it is just a wild situation and there is a permanent war of public space. We are all inside this war. Ivan Melnichuk and his architect colleagues are archiving what they see and try to create case studies. This process is useful as it allows those of us who live inside to step away and to distance ourselves and to enable us to see what is really happening in that space. The artists are revealing some of the hidden structures and narratives that are very small and everyday, but are emblematic of the situation.

SC: Do you think this also involves a sense of creativity and violence as you have proposed for your project?

LN: There is this grass roots creativity. You make do with what you have, but this can also be very violent. But if you put only your personal intention into the centre and don’t reflect on the public good, this can be really damaging.

Ivan Melnychuk is an artist and architect living in Kiev. He is a member of the Gruppa Predmetov and the Melnychuk-Burlaka group. He is also co-founder of the Method Fund and founder of the Boulléewood Architecture Consultancy.