That day, I wrote in my diary:

THIS IS A SAMPLE HEADING STYLE 1

It was a very odd and meaningless trip to Medzhybizh. I rescheduled it several times. Finally, we had a very hasty walk over the village. We went inside the Besht synagogue. It was empty. We set at the table and chatted for a long time. In one moment, people jammed the synagogue: they quickly occupied the hall and listened carefully to their tour guide. He was monotonously telling something in Hebrew. There were lots of people; it was a group from Israel. Suddenly, the tour guide grabbed a clarinet and started playing.

It was very crowded at the Baal Shem Tov’s grave, not at all like in Sadgora.Then, we met a local old man and asked him about the church’s ruins. He had a very nice and kind face and a grey moustache. Pointing to the side, he sighed and told that his father had crashed during the restoration of this church. The man was a child back then. After that he told that his son had died three years and two weeks ago: he was riding his Jawa along the highway and got hit by a drunk Lanos driver.

Then, we were looking for a place to eat. Finally, we found a small inn. A group of cultural workers from Lithuania was about to leave the place. Their guide – a weird-looking crippled man with a stick – all of a sudden started talking to us in Italian. Something like ‘quadroformacci Mussolini bella grazia.’ He said his name was Petro and his surname was like ‘dollar’ except without ‘d.’ He was a real rebus man, this Petro Olar.

Нужно I have to mention that we met a bus with this Lithuanian group back in the fortress.

One more thing: there was a small shop nearby whose owner wanted to be Jewish. 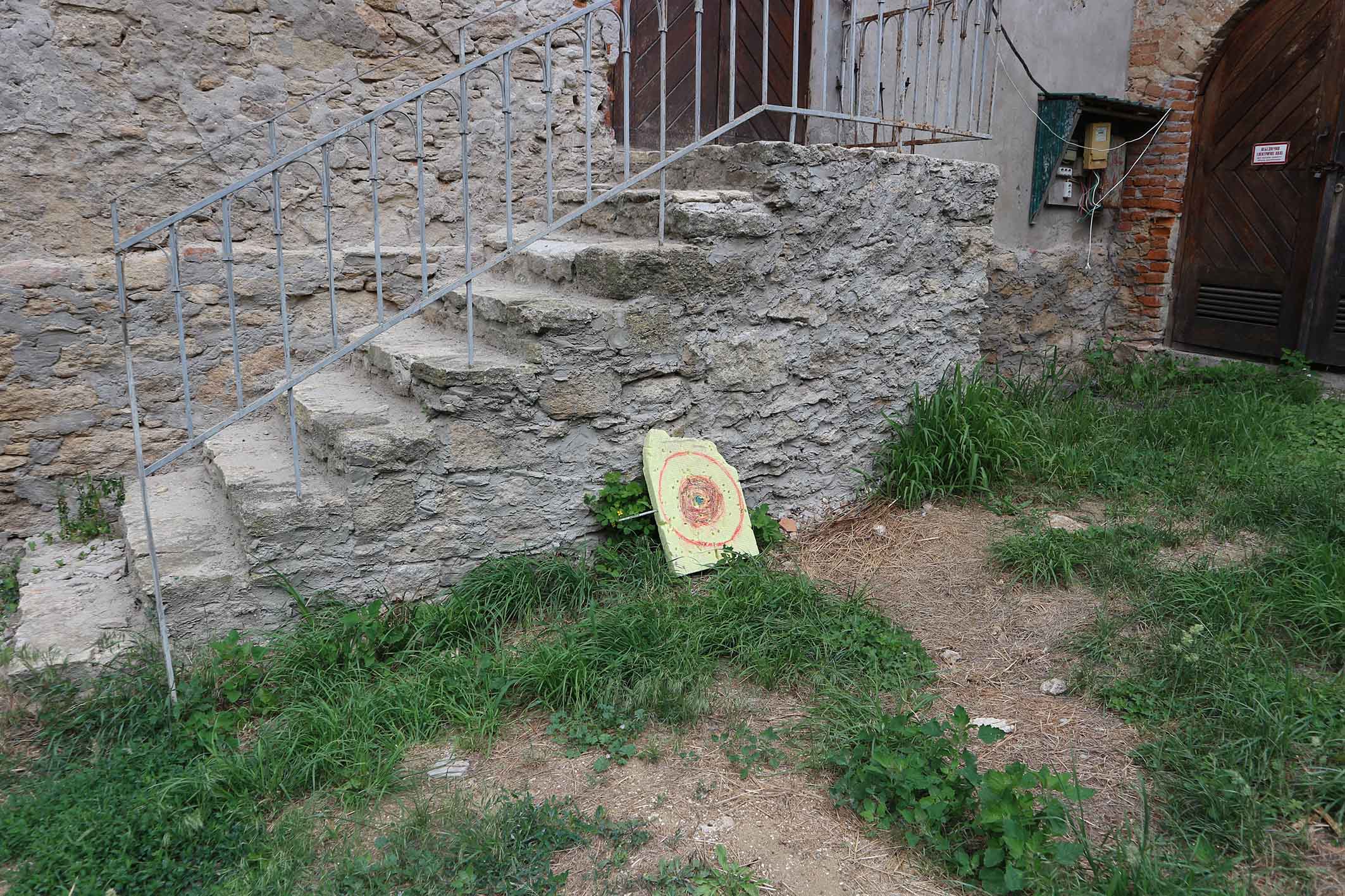 Medzhybizh is a small settlement in the Khmelnytsky region.

The first mentions of the Jewish community of Medzhybizh are dated around the end of the 15th and the beginning of the 16th century. It was some kind of a tax-free zone: Sigismund I of Poland offered tax deductions to the community which stimulated its rapid growth. By the beginning of the 17th century, the Jewish community of Medzhybizh had become one of the most significant in Podolia.

By mid-century, around 1648-53, Bogdan Khmelnytsky’s forces occupied Medzhybizh several times. At the end of the 1650s, the community was renewed.

Со Starting from the second half of the 18th century, Medzhybizh became an important centre of emerging Hasidism. Somewhere between 1740-60, Israel ben Eliezer Baal Shem Tov founded the first Hasidic community there. Nachman of Breslov, who founded the Breslov branch of Hasidism, was born and spent his early years in Medzhybizh.

At the beginning of the 20th century, Jewish people were joining the Zionist movement. However, most synagogues and Jewish organisations were shut down by the and of the 1920s. The building of Beth Midrash founded by Baal Shem Tov, along with the preacher’s hat, cane, and chair, was preserved by the Hasidim and remained intact until 1941.

Medzhybizh was occupied by German troops on 8 July 1941.

On 22 September 1942, most Medzhybizh ghetto residents were shot in gullies on the banks of the Bug river. According to Soviet data, the number of Holocaust victims that were buried in gullies to the west of Medzhybizh is 2558. About two dozens of Jewish families came back to Medzhybizh after the war.

In Autumn 1988, a group of young Hasidim led by Ilya Dvorkin travelled from Leningrad to Medzhybizh. They made 11 films out of their trip. The author described them as follows: “Ten short films shot in Slavuta and Bershad provide a unique possibility to meet the last Jews who were given a Jewish education and raised in a living community before the Second World War. We also see what happens with a small town Sudylkov Jews didn’t return to. Our last, full-length film ‘The Trip to Medzhybizh’ shows how the expedition participants meet the city where Hasidism has originated. I wanted to show what our encounter with Ukrainian towns meant to us and what a turning point it became.” These films were edited only 20 years after they were shot, during 2006-2009, in Israel.

In July 2019, I travelled to Medzhybizh with my friend and partner in the ‘new Jewish art’ Harry Kraevits.

THIS IS A SAMPLE HEADING STYLE 2

I decided to present my ‘research’ for Creating Ruin as a script and soundtrack of a film that will possibly never be made.

So, what is the subject of my ‘research’?

Maybe, the phenomenon of religious tourism? The emerging infrastructure whose model can also be seen in another sacred Hasidic centre, Uman? Maybe. I can’t give a clear and precise answer. And why would I?

After all, a Bauhausian office chair left at the cemetery triggers a wealth of associations and temptations to interpretation. Why wouldn’t it be this research subject? 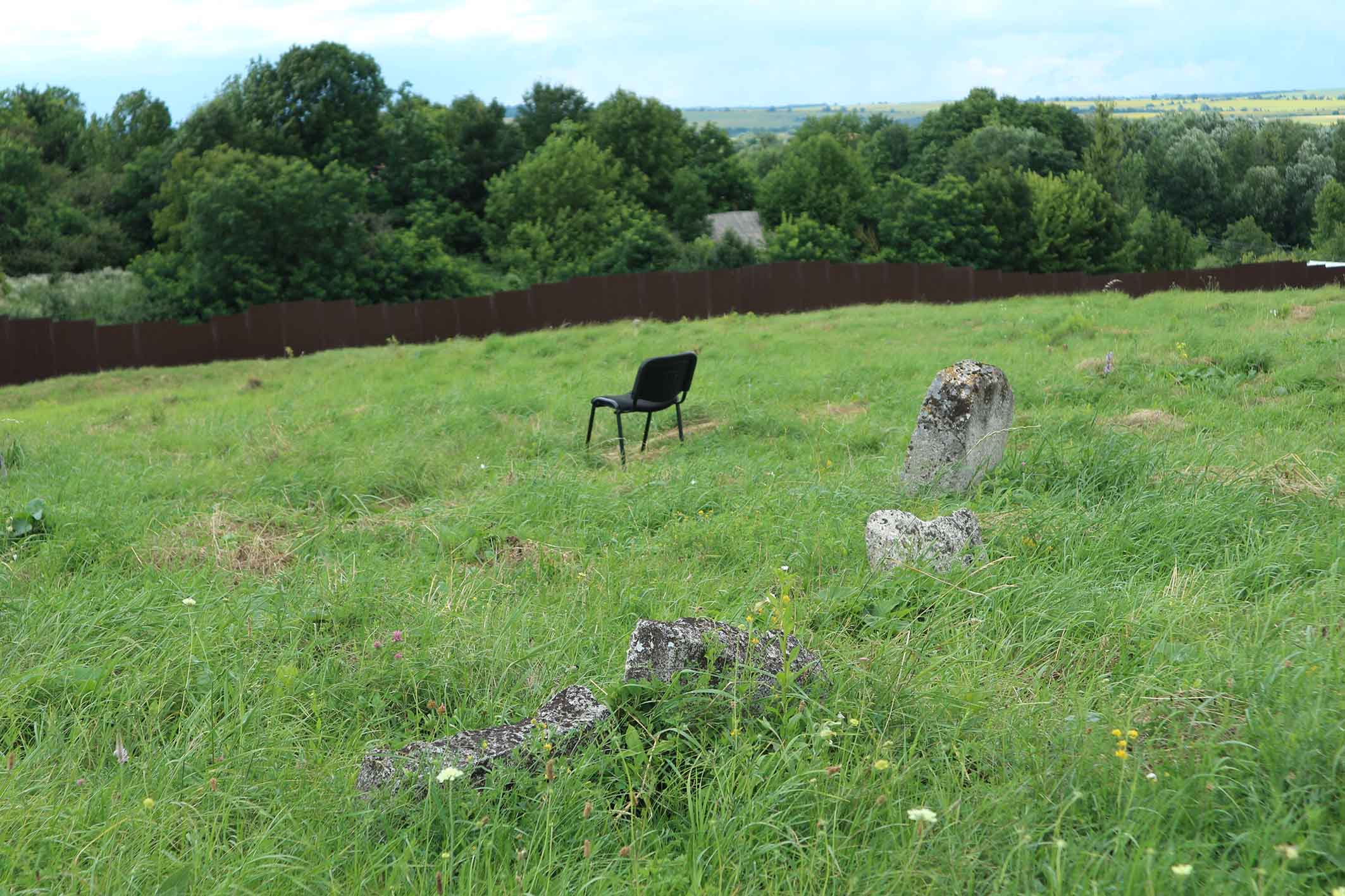 Or possibly a lovely local history museum of Medzhybizh? Or Baal Shem Tov’s story? I still don’t have a clear answer.

I think it’s time to begin a script. 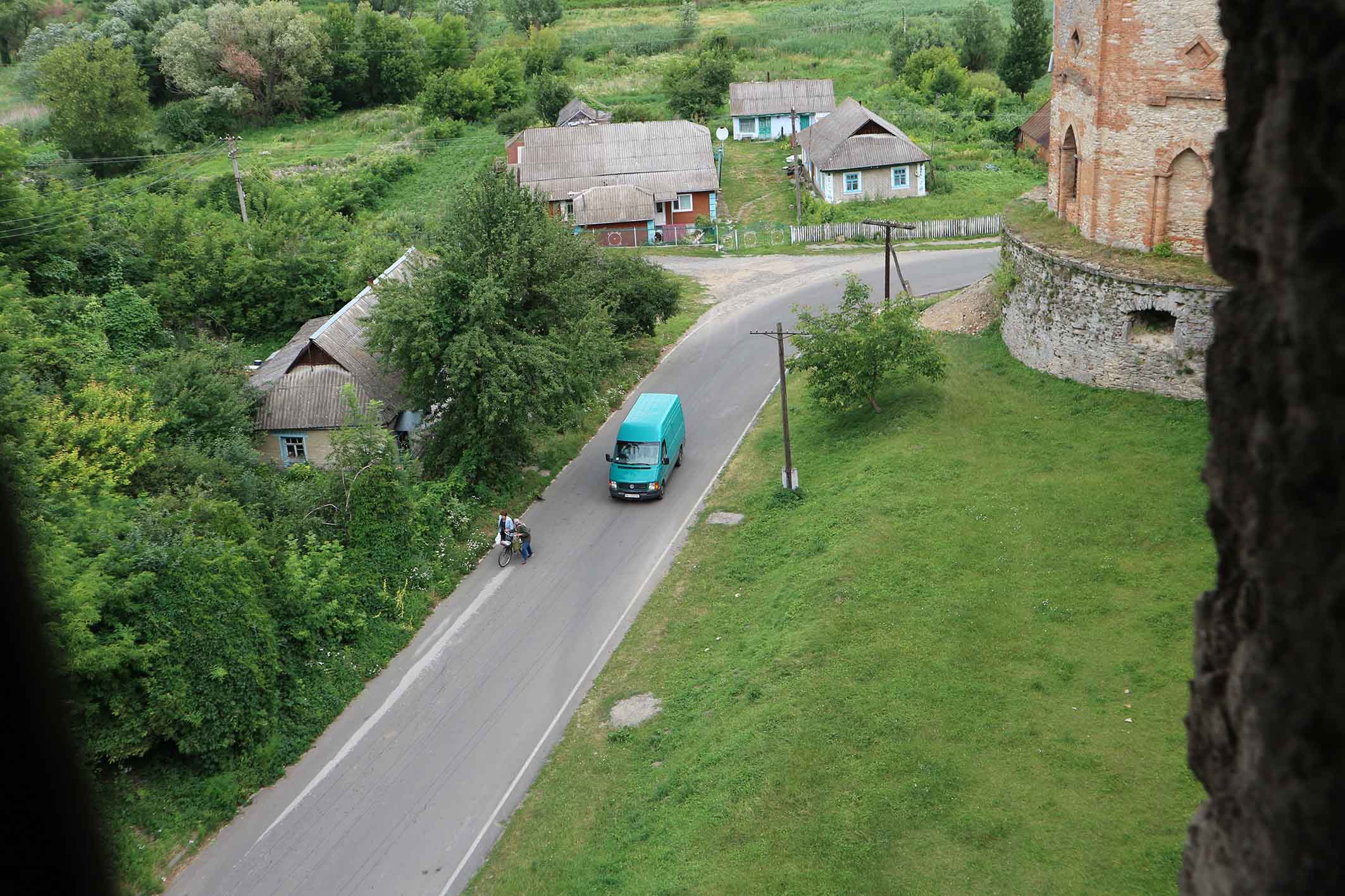 A panoramic shot of the Medzhybizh fortress slowly comes out of the dark; the camera moves down from the fortress. We see a bus parked nearby. A group of people comes out of it, led by director Petro Olar walking with a limp. He brought Lithuanian actors to Medzhybizh. 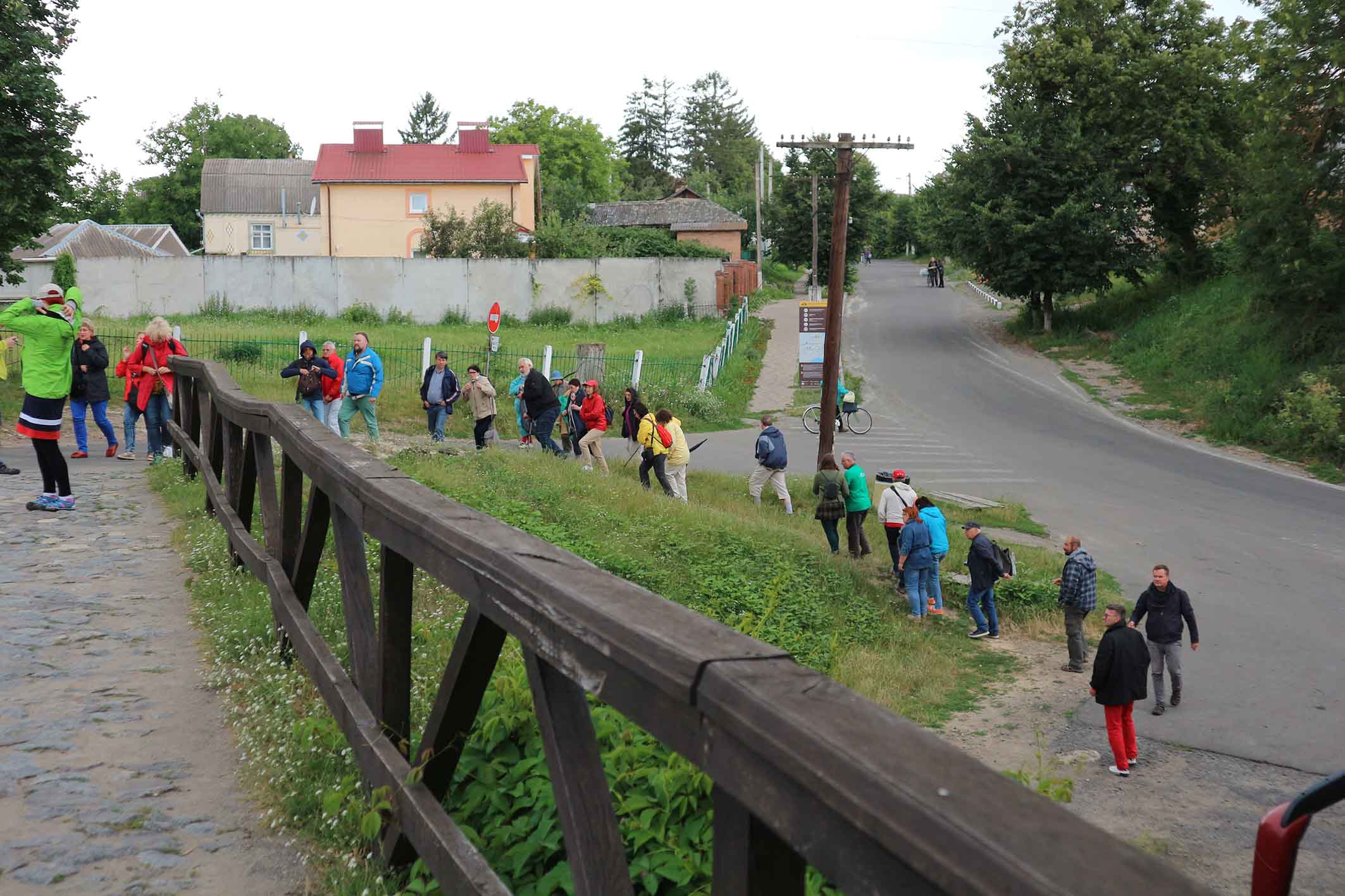 They slowly disband in different directions, examining the fortress. The camera follows one of the actors. We see how he enters some room inside the fortress. 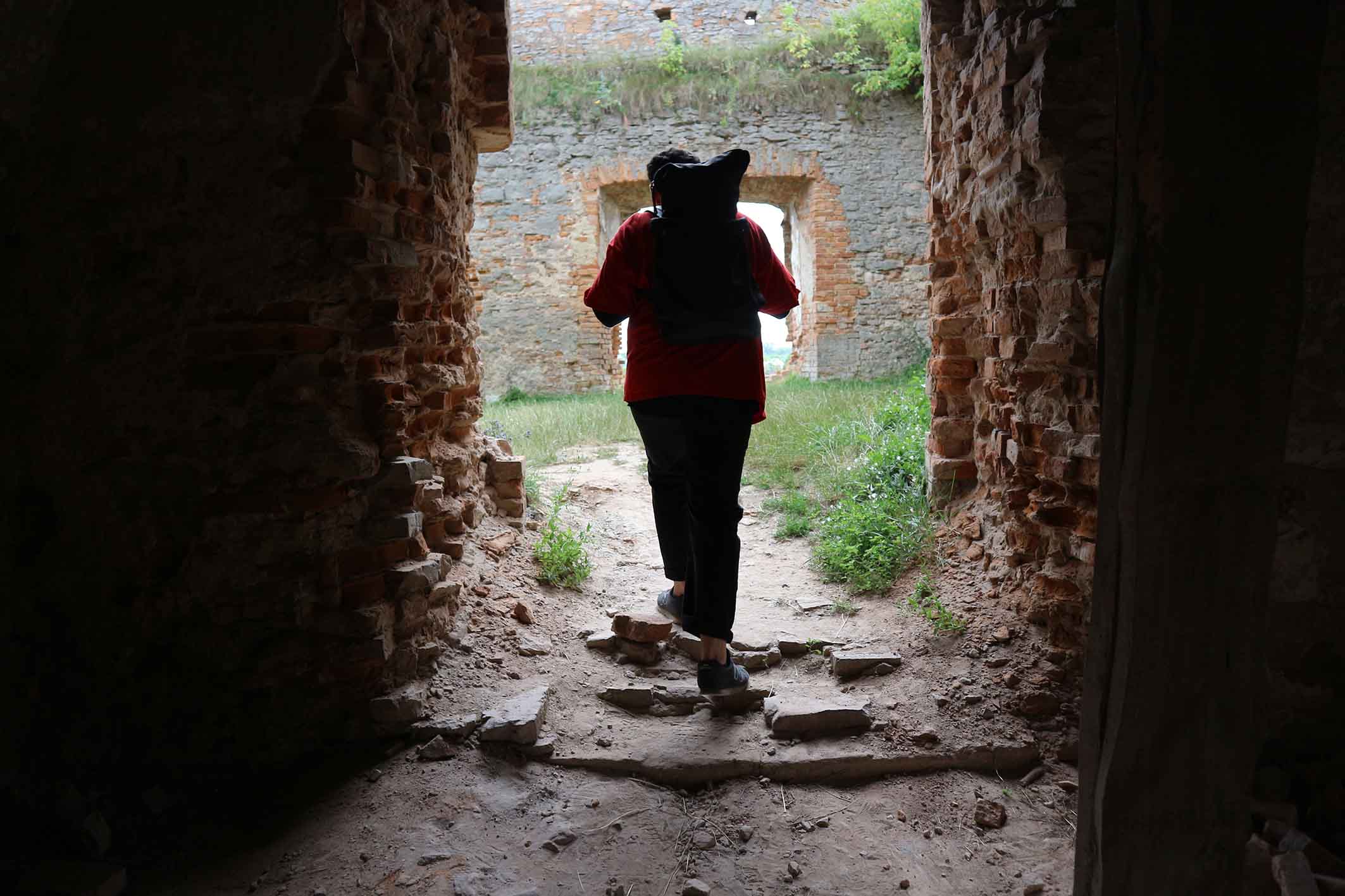 “The Pleasure of the Text” 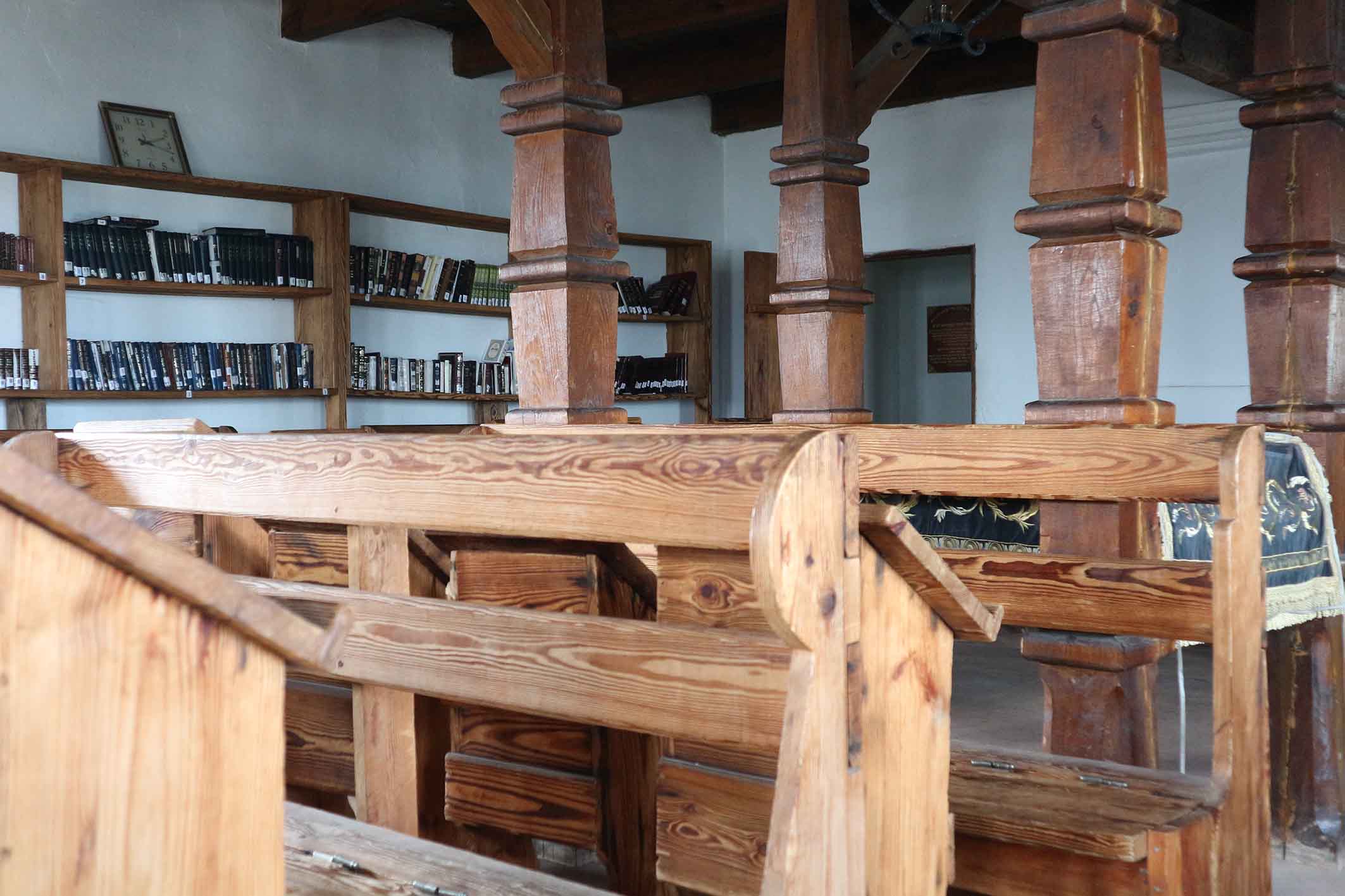 In one moment, people enter the hall. They fill the space completely. They listen carefully to their tour guide. Suddenly, he takes the clarinet out of the case and starts playing.

The camera moves towards the exit. 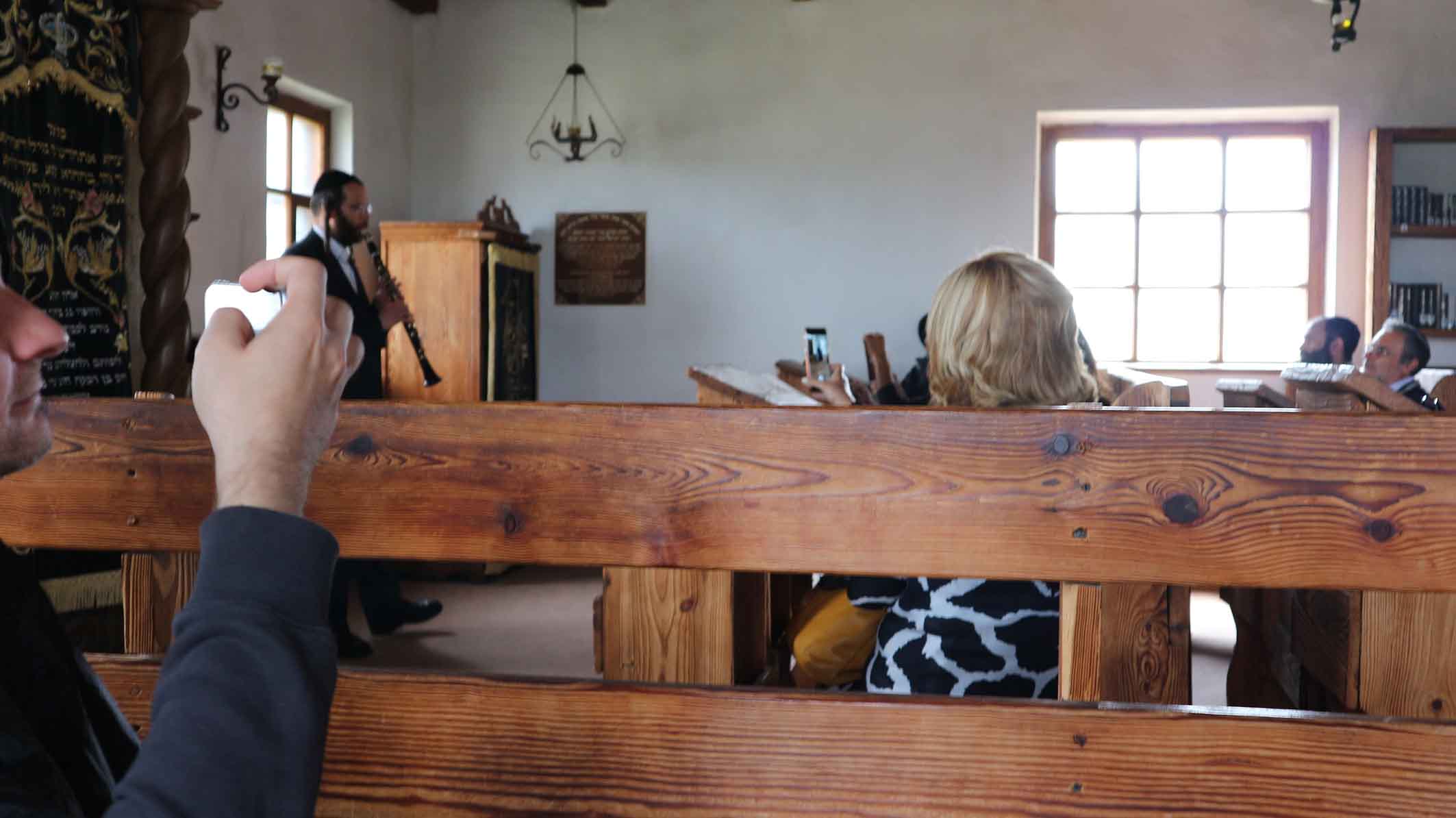 We see a typical roadside ‘Leisure Palace.’ Lithuanian tourists come out of the restaurant. The camera moves inside the building. Leftovers and bottles of vodka, almost full, are left on the tables. Director Petro Olar is telling something to two Lithuanians sitting at the table. He speaks a language I don’t understand, remotely similar to Italian. After a few minutes, the camera moves towards the window where we see the next scene through the white light. 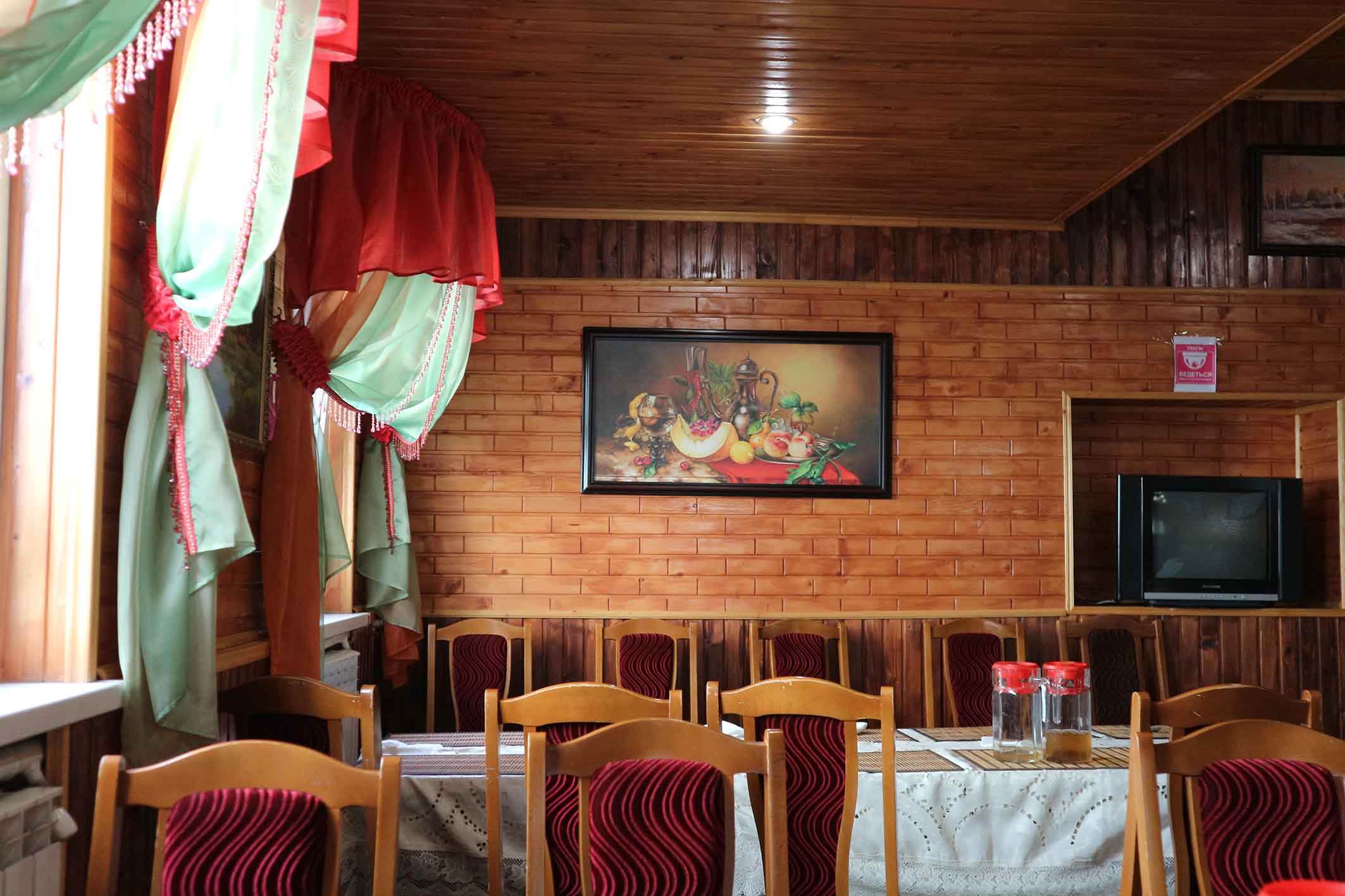 We see a white cube and a long wooden table placed in the middle. There are glasses and bottles of mineral water on the table. People gathered at the table are participants of the conference dedicated to the construction of the modern art museum named after Baal Shem Tov and based on the local history museum. 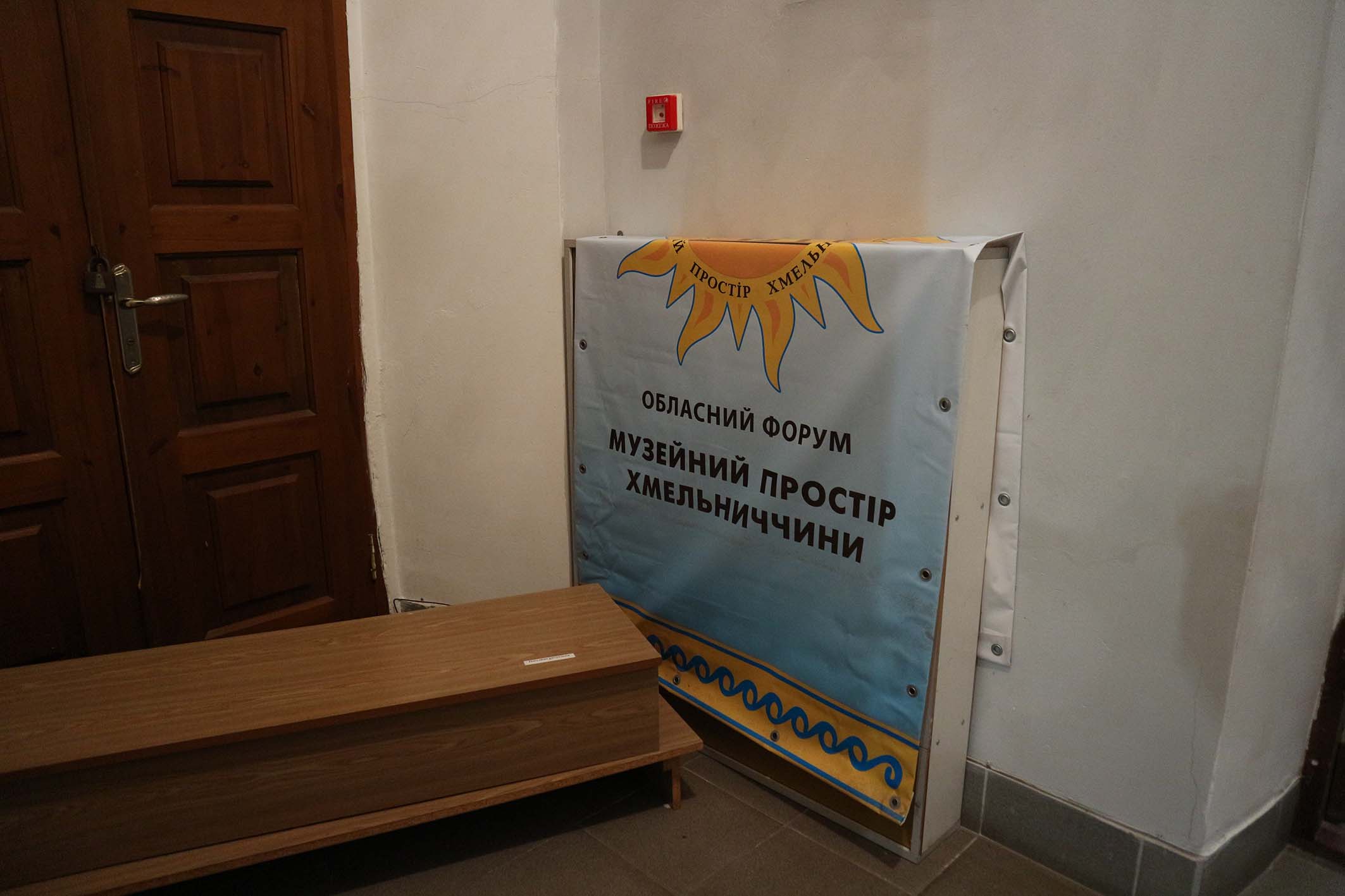 Nikolay Karabinovych is an artist and researcher. Lives in Ghent (Belgium). Works with video, text, sound, and performance practices.